I saw my first pygmy seahorses on the Great Barrier Reef in 2006. There were a few of them on a sea fan at a secret location at a very popular dive site. The location was secret because the dive operator didn't want them to be disturbed. I saw them again - well pygmy seahorses on the same sea fan - in 2007. I did not see any pygmy seahorses again until my dive trip around Komodo Island, Indonesia, in 2012. In 2013, I travelled to Raja Ampat in eastern Indonesia and not only saw many of the more common species, Hippocampus bargibanti but also two other species: H. denise and H. pontohi.

Raja Ampat, which means Four Kings, is an archipelago of over one thousand small islands, cays, and shoals surrounding the four main islands of Misool, Salawati, Bantanta and Waigeo to the west and south west of West Papua. It is said to be a hub of marine diversity.

I travelled through Raja Ampat on the S/Y Indo Siren which is part of the fleet of Worldwide Dive and Sail. You can read more about my trip on my dive site. While I didn't see pygmy seahorses on every dive, most dives where we could have seen them, I did, particularly in the southern parts of Raja Ampat.

Hippocampus bargibanti was the first pygmy seahorse species to be discovered and described. It may also be the most widespread, being found in from Australia all the way to southern Japan and ranging as far west as Bali in Indonesia (Kuiter, 2009) and east to Palau (Smith, 2010). Apparently, they were discovered by accident after their host sea fan was collect for research by a New Caledonian scientist, George Bargibant, in 1969.

They are very particular about the sea fan on which they live and adults are only found on sea fans of the genus Muricella. Muricella sea fans do not have symbiotic algae (Fabricius and Alderslade, 2001) and so are not dependent on light and can be found over a great range of depths, often deeper than 20 metres. The seahorses are perfectly adapted to living on this sea fan and match the colour and even the polyps of the sea fan. This makes them difficult to find, especially since they are only around 2 cm high (with their tail stretched out). 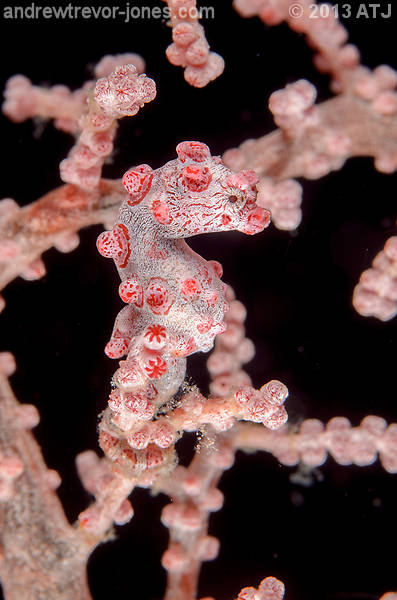 We saw this species throughout Raja Ampat and once I got my eye in, I could find them on many Muricella sp. sea fans I inspected. 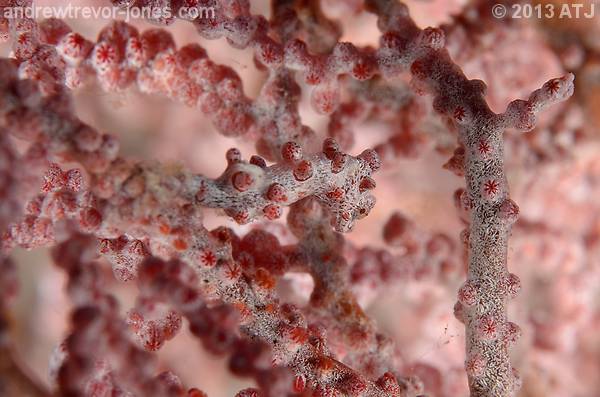 Pygmy seahorse, Hippocampus bargibanti, near Misool Island. Depth: 10 metres. This gives some idea how difficult they can be to see.

One of the nice things about there being so many pygmy seahorses around is that I only took a few photos of each one knowing I'd see another one soon. 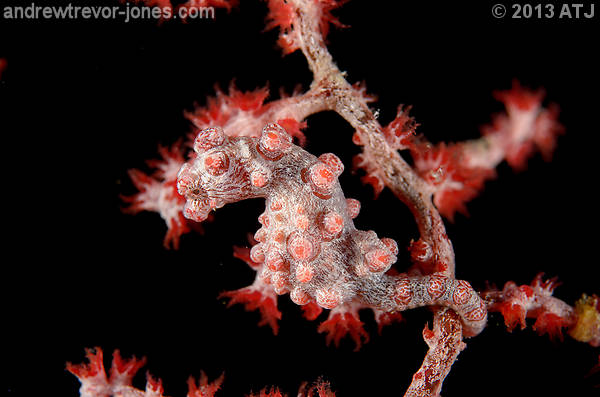 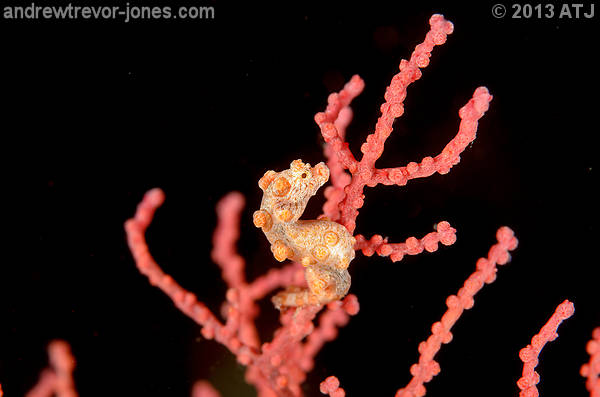 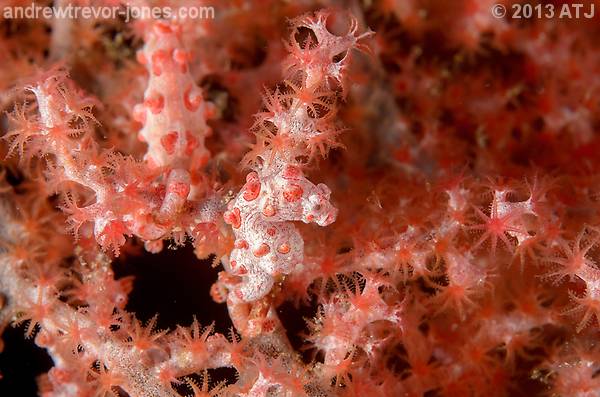 Hippocampus denise is a relatively new discovery and was described in 2003 by Lourie and Randall. Their distribution is not a widespread as H. bargibanti however they range from central Indonesia and northern Borneo to Vanuatu (Kuiter, 2009). Unlike H. bargibanti, they don't confine themselves to one genus of sea fan but can be found on fans of the genera Acanthogorgia, Annella, Echinogorgia, Ellisella, Melithaea, Muricella, Verrucella, and Villogorgia (Smith, 2010). These sea fans are all azooxanthellate (Fabricius and Alderslade, 2001) and have no dependency on light.

H. denise are more slender than H. bargibanti and tend to have smaller bumps. We only saw H. densie in the southern parts of Raja Ampat, around Misool Island. 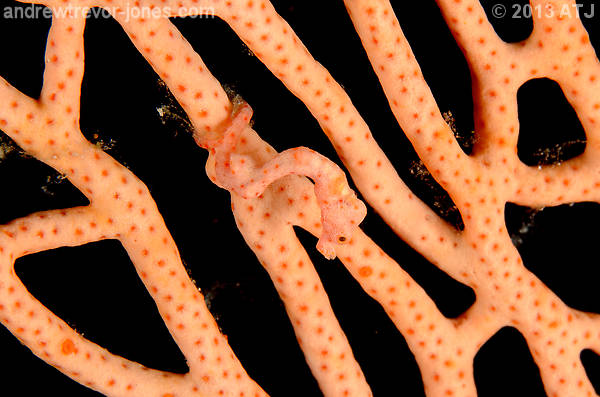 Most of the H. densie we saw were a pale pink/cream colour. Like the H. bargibanti, once I got my eye in I was able to find them myself on their sea fans with a lot of patience. 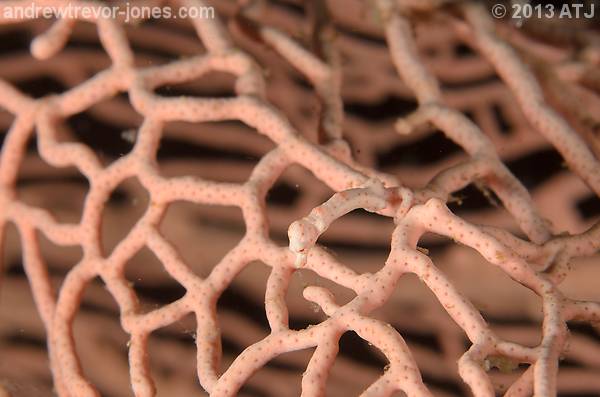 One of the first H. denise I was shown was actually one of the rarer red morphs. 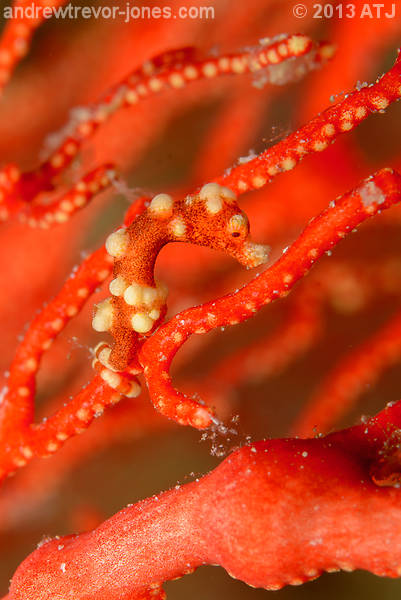 Pontoh's pygmy seahorse is an even more recent discovery, first being described in 2008 by Lourie and Kuiter (along with H. severnsi and H. satomiae). Unlike H. bargibanti and H. denise, they are not associated with sea fans but tend to be more free living but are often seen on the stalks of hydroids. They are found throughout Indonesia and may extend north to The Philippines and east to Fiji (Kuiter, 2009). They are much smaller than H. bargibanti and H. denise.

We only saw H. pontohi in the northern parts of Raja Ampat, particularly around Mansuar Island and Dampier Strait. Not being found on sea fans meant we didn't know where to look for them. Interestingly, given a location to look, it was actually possible to find them, even though they are tiny. I managed to find a couple myself. 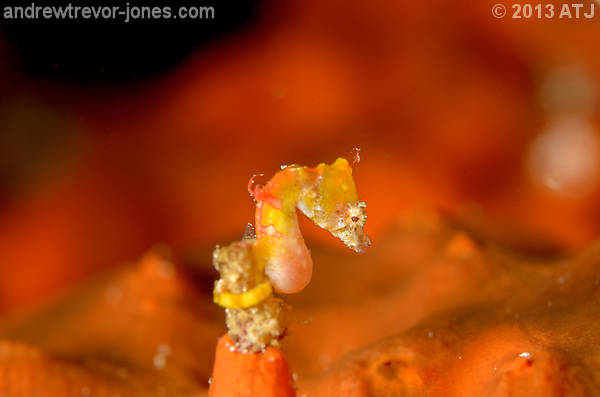 They can be pretty hard to spot when they are attached to hydroids. 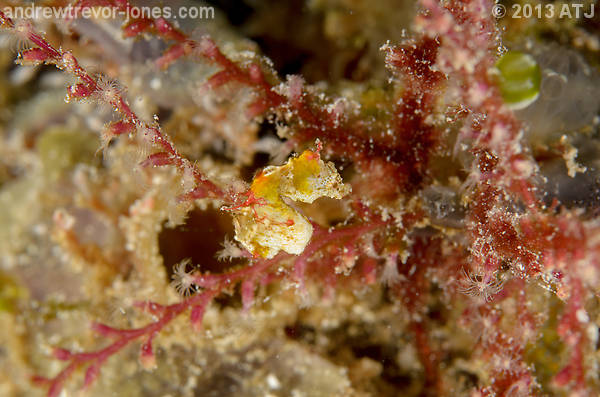 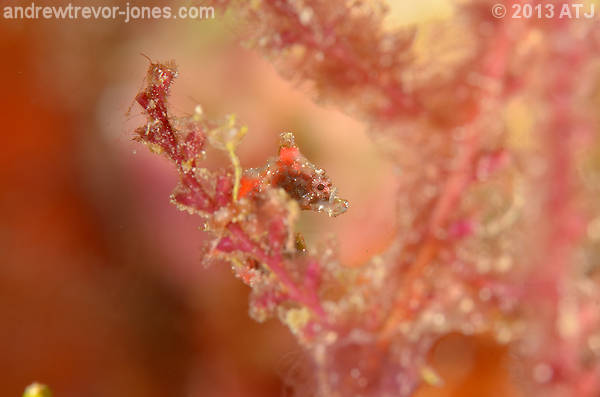 I hope to get back to Raja Ampat one day and see some more of these pygmy seahorses. I also hope to get to see some of the other species of pygmy seahorses such as H. severnsi, H. satomiae and H. waleananus all found in Indonesian waters. The Holy Grail would be H. colemani which was discovered by Neville Coleman at Lord Howe Island and has only been seen on a few occasions.

Fabricius K. and Alderslade P. 2001. Soft Corals and Sea Fans: A comprehensive guide to the tropical shallow-water genera of the Central-West Pacific, the Indian Ocean and the Red Sea. AIMS, Townsville, Australia. 264pp.