In January 2011, while diving at The Leap, Kurnell, another diver pointed out what I initially thought was a grey sponge and only on looking from a different angle did I realise she was pointing out an anglerfish. I took some photos of the angler but when looking at the photos realised it was not a species that was in any of my books. I later found out that this species has been seen around Sydney, in particular Botany Bay for a few years but was a previously undescribed species. I have seen a number of different individuals at Kurnell and Bare Island since then and have had to label them as "Undescribed angler" with no species name. That is until September 2014 when Rachel Arnold, Rob Harcourt and Theo Pietsch published a paper describing this species and giving it the name Porophryne erythrodactylus. 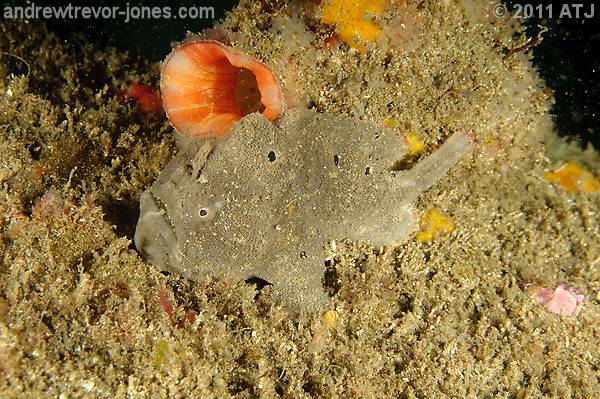 The first red-fingered angler, Porophryne erythrodactylus, I saw at The Leap in January 2011.

Arnold et al's paper was published in Copeia in the last few weeks and describes in detail both the new genus, Porophryne, as well as the new species P. erythrodactylus. The genus is derived from Greek with poro, meaning bearing pores, alluding to the spots on the head and body which look like the pores in a sponge, and phryne, which means toad, and is often a suffix for anglerfish genera; anglerfish are often called frogfish outside Australia. The specific name also comes from the Greek with erythro meaning red and dactylus meaning fingers, indicating the red tips to the pectoral fins which look like fingers.

A command name of red-fingered anglerfish is appropriate.

I believe the name should be pronounced: Pour-Oh-Fry-Nee Air-Wreath-Row-Dack-Till-Us. That is how I'm going to pronounce it. 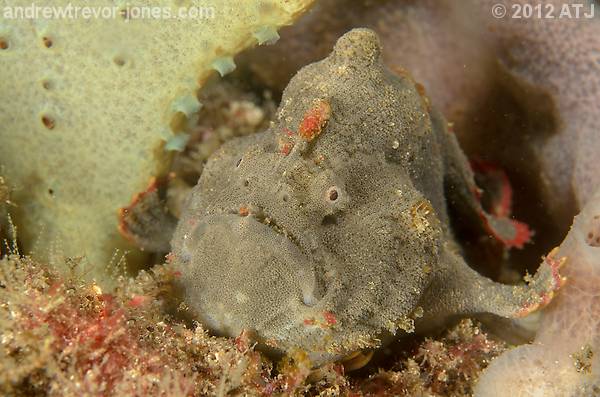 A grey individual I saw at The Steps, Kurnell, in December 2012. 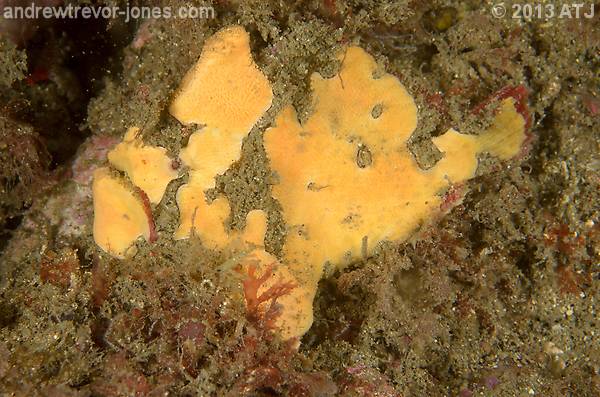 An orange individual I saw at The Monument, Kurnell, in October 2013.

From my own observations, I have found that the orange and red forms have algae growing on them to help with their camouflage. The pattern of the algae is not the same on each individual and can be used to tell one individual from another.

A white and red individual I saw at Bare Island, La Perouse, in December 2013.

It is great now that this species has a name and I no longer have to just say "Undescribed angler".

A big thanks to Della Ross at Scubathlon for the heads up on the name and to Mark McGrouther from the Australian Museum for sending me a copy of the paper.