Fluorescence is an interesting effect which we frequently see with our own eyes. Capturing fluorescence in a photograph is not always easy but with the use of a couple of filters can be achieved very effectively. The filters work simply because they follow the principles of fluorescence. In the following article I will try to explain fluorescence, with examples from corals (one of my areas of expertise) and show how to photograph the fluorescence in corals.

In order to understand fluorescence, some basic principles of light and pigments are helpful.

A lot of light that we see we perceive to be white. For example, Sunlight appears to be white. There are subtle differences throughout the day but overall, we'd describe the light as white. Photographers are familiar with the variations and have to deal with white balance issues, especially under sunny, shaded and overcast conditions. We either have to set the white balance on the camera for the appropriate conditions or fiddle in post processing to make the subtle but required colour adjustments. While light may appear to be white, it is not actually white at all. It is made up of a range of different colours which when combined give the appearance of white. You can actually see all the component colours in a rainbow. Different lighting conditions (sunny, shaded, overcast, etc.) happen because there are different proportions of the component colours. The proportions of each of colours in a given situation is known as the spectrum of the light. If you have more than one spectrum, they are known as spectra.

The colours of the components of the light are determined by their wavelength. It is not important to understand what wavelength is but it is convenient to think of it like paint by numbers. If every possible colour is assigned a number between 400 and 700 (going to many decimal places) you sort of get the idea. Figure 1 shows the colours for range of wavelengths from 400 to 700 nanometers. For more information on the relationship between colour and wavelength, see Light: Colour and wavelength.

Figure 1: The colours of different wavelengths of light.

It is rare that you would ever see light at a single wavelength of light or even a very narrow band.

When a pigment absorbs light, three different things can happen. The energy can be converted into heat. You will feel much more heat from the Sun wearing a black shirt (which absorbs most of the light) versus a white shirt (which reflects most light). Note that much of the heat from the sun is infra-red, but you can still notice the difference between black and white clothing.

Finally, the energy may be captured in a chemical bond. An example of this is photosynthesis.

As introduced above, fluorescence happens when light is absorbed by a pigment and then instantaneously remitted. Energy is lost in this process so the emitted light has a longer wavelength than the original light. In figure 1, shorter wavelengths are to the left and longer to the right. For example, blue light may cause emission of green fluorescence. Pigments that fluoresce are known as fluorescent pigments. 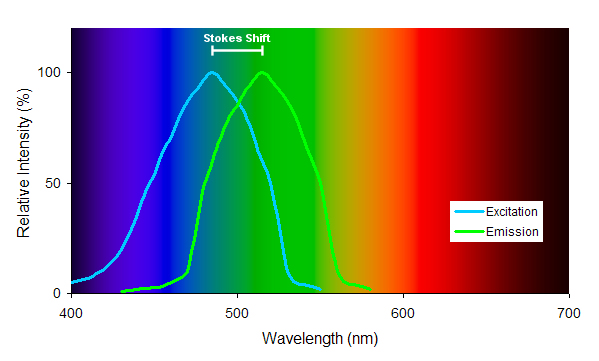 Fluorescence can be seen in lots of places. Some birds have fluorescence in their plumage. Some insects exhibit fluorescence. Man-made fluorescence is very common, especially recently in safety clothing. The fluorescence often makes the object look brighter than it really is, making it stand out from the background, which is why it is used for safety gear.

Many corals contain fluorescent pigments. Green fluorescence is the most noticeable, but there is also yellow, orange and red fluorescence. The purpose of the pigments is unclear. It has been suggested that the pigments may protect the corals and their zooxanthellae from too much light or from damaging short wavelength light (Salih et al., 2000). Other studies provide evidence that these pigments enhance photosynthesis in corals that live in low light (Schlichter et al., 1994).

The fluorescent pigments in corals are proteins that the coral makes itself in much the same way it makes other proteins. The interesting and useful aspect of fluorescent pigments being proteins is the gene sequence of the pigments can be determined and then those sequences inserted into the genes of other organisms, such as bacteria and even vertebrates such as frogs and mice and most recently into marmosets. This is a hot area for research because the fluorescent proteins make observations easier and is being used in many areas including disease and cancer research.

The original research into fluorescent proteins used Green Fluorescent Protein (GFP) extracted from a jellyfish (which are related to corals) knows as Aequorea victoria, and this was the first organism where the gene sequence was mapped. Other GFP-like proteins have been found in corals and these are also being mapped and being used for research. There are some really exciting proteins where the fluorescent properties can be changed on demand (by exposure to UV light) which adds an extra element for research.

Most aquarists who keep corals would be familiar with the effects of fluorescence in their corals. The use of what's termed "actinic" lighting is common in coral tanks. Actinic fluorescent lamps put out a narrow band of light in the violet range (between 400 and 450 nanometres). This range of wavelengths includes the excitation wavelengths of many coral fluorescent pigments and so the corals fluoresce. If the actinic lighting is the only lighting, the corals appear to glow. They aren't really glowing but appear to because our eyes are not particularly sensitive to the wavelengths from the lights but are more sensitive to the wavelengths emitted by the fluorescence, so the coral appears brighter than the surroundings (which are only reflecting the actinic light).

While observing corals under actinic lighting does show off the fluorescence (and looks pretty cool), our eyes are still sensitive to the actinic lighting and so we can still see non-fluorescent objects that just reflect the light. For example, anything that is white will still show. In order to show only the fluorescence you need to make use of the fact that the fluorescence results in a shift in the wavelengths. If the only light provided is within the excitation wavelengths of the pigments and you then filter that light out as part of the observation, the only thing you would see is fluorescence. This is the principle behind the filters available from Night Sea.

It is possible to take photographs of corals using actinic lighting alone. There are two issues which hamper this approach. 1) The light output from actinic lighting is not all that bright and so long exposures are required. 2) The difference in sensitivity of the digital sensor to the actinic light and the emitted fluorescence is not as great as our eyes and so the resulting photographs are not as dramatic. Better results can be achieved through the use of filters.

The best way to photograph fluorescence in corals (and other fluorescent subjects) is to use an electronic flash with a filter on it which only allows short wavelength light within the range of the excitation wavelengths of the pigments. This will produce a much brighter light than you'd get from actinic lighting. A second filter is used on the lens which blocks the shorter wavelengths and allows the longer wavelengths (those in the range of the emission wavelengths). The combination of the two filters results in pretty much only fluorescence being captured in the photograph. These filters are available from Night Sea.

One limitation of the Night Sea filters is they don't publish the wavelengths allowed by the excitation filter (the one used on the light or flash) or those blocked by the barrier filter (the one used on the lens or visor). Another limitation is they don't produce a range of filters to cater for different excitation/emission wavelengths exhibited by different pigments. The filter sets they produce work very well for green fluorescence, but less so for red and yellow.

Here are some photographs of corals taken in an aquarium showing how the corals look under normal light and then just showing the fluorescence. Figure 3 shows a small colony of the staghorn coral, Acropora intermedia (syn. A. nobils). Under normal light the coral appears quite blue, especially around the axial polyps. The fluorescence is pretty much green. Note that the blue coloration is also caused by a GFP-like protein it just doesn't fluoresce.

Figure 4 shows a very small colony of a pocilloporid coral, Stylophora pistillata. The coral is very pink under normal lighting. The fluorescence photograph shows both red and green fluorescence.