It has been nearly 3 years since I bought my first digital SLR, the D70. The camera has served me well with some 14.5 thousand shutter actuations. I have used it both above and below water and while I only have a few complaints, it was time to upgrade. At the time the D300 was announced, I was already contemplating an upgrade. Once I saw the specifications for the D300, I knew I had to have one.

The D70 has really been a good camera but it has some frustrating limitations. The viewfinder is very small. This is only a minor inconvenience for above water photograph but underwater it makes things very difficult as the dive mask makes it difficult to get close enough. I am unable to see the complete frame in one go and if I want to see the display at the bottom, I lose about half of the frame. Additionally, the viewfinder only displays 95% of the frame which makes it difficult to accurately frame a shot. The D300's viewfinder is larger with a magnification of 0.94x (versus 0.75x for a 50mm lens at infinity) and the frame coverage is 100%, i.e. I will see the whole frame. I'm hoping this will make a big difference underwater.

The D70 only has 5 focus areas, one in the centre and one in each direction from the centre on the line of the thirds. This has been very limiting, especially when taking photographs of fish when I want the eye to be in good focus but still have the fish placed appropriately in the frame. It is also not possible to place the focus on one of the four intersections of the thirds. For example, I was photographing an orb weaver in its web and I could not place the spider on one of the intersections of the thirds. The D300 has 51 focus areas and while none of these actually sit on the intersection of the thirds, they go close enough for practical use. Any one of these focus areas can be used specifically, and the camera also includes a dynamic area mode and an auto area mode. I will probably use the single-point AF mode the most often, but will have fun with the other two.

ISO above around 400 is not really usable on the D70. I don't often need higher ISO, but there have been times where being able to push to 800 or even higher would have been an advantage. The ISO handling of the D300 is meant to be better than the D200 which was already streets ahead of the D70. This will be an interesting area of experimentation.

I had been preparing for the D300 for some time. In mid-September I purchase a license key for Nikon CaptureNX and I knew that PaintShopPro 9 wouldn't be able to open the NEF files from the D300, even though it has worked fine for years with the D70. I also migrated to Nikon ViewNX from Nikon View 6 as I knew the latter wouldn't work with D300 NEF files either. Two weeks ago I downloaded the CaptureNX 1.3.0 update which supports the D300 files and a week ago I got ViewNX 1.0.3 for the D300 support. A downloaded D300 manual meant I could do some early reading and the spreadsheet from Nikonians which lists the settings for the camera meant I could start on the right foot. I even had a fully charged EN-EL3e battery ready for the arrival of the camera. This was a replacement battery for the D70 due to a recall of many of the EN-EL3 batteries.

I ordered the camera from a supplier in Hong Kong on Sunday 9 December and they sent the camera by mail on Thursday 13 December and it arrived at my house early on Monday (17 December) afternoon. Unfortunately, I was working at the time and had to wait 40 minutes before I could start to play. Even then only had 20 minutes before my next conference call was due to start, so I had to rush.

I inserted the fully charged battery and a 4GB Extreme III CompactFlash card and turned the camera on. I set the date, time and timezone information (page 316 in the manual). I set the Image Quality to NEF (page 56), the Focus Mode to Continuous Servo AF (page 62) and the Exposure Mode to Manual (pages 104,111). I set the shutter speed to 1/100s and f/stop to f/22. I mounted the SB-800 with my DIY softbox on the camera and went out to take my very first shot. I headed down the backyard to the Eucalyptus tree that has shield bug nymphs and took my very first shot. 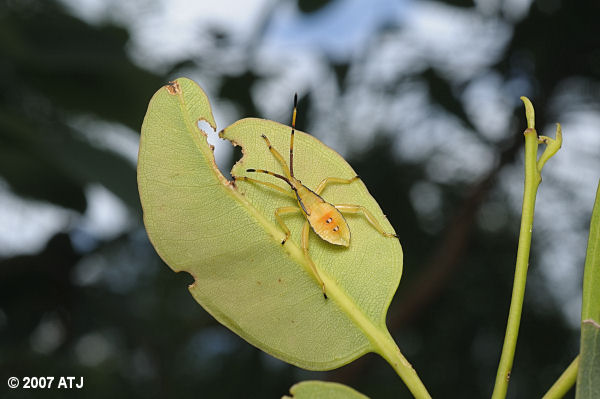 A shield bug nymph, my very first photograph taken with the D300 This is pretty much straight out of the camera with a white balance adjustment (see below), resizing and a small amount of UnSharp Mask.

I probably should have got closer and spent more time on framing, but I'm still pretty pleased with my first effort. A cropped version of the photograph looks a lot better. 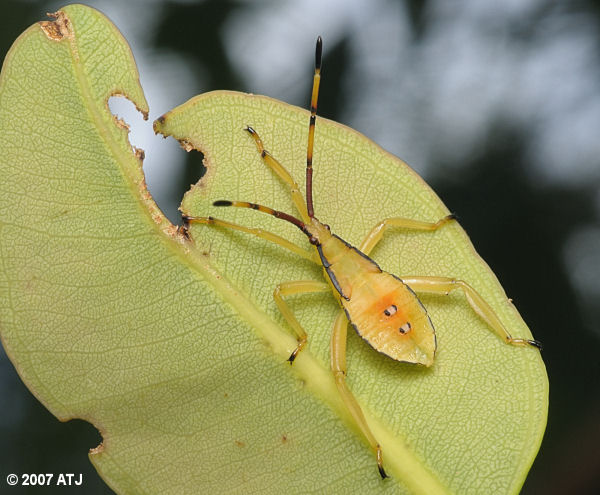 In my haste to take my very first photograph I forgot two important things. First, I left the White Balance on auto and so had to adjust this with CaptureNX as part of my post processing. Second, I forgot to format the card which I had previously used in the D70. This meant that the filename of my very first photograph was DSC_3641 instead of DSC_0001. I had taken two photographs already so I formatted the card and took a third. It was named DSC_3643 so the numbering was stuck. A quick search of the manual and I could see I could fix this by setting the File Number Sequence (d6 in the Custom Menu - page 283) to "Reset". I renamed the third image which was still on the card to DSC_0003, put the card back in the camera and took another photograph, which was DSC_0004. The camera automatically goes back to "On" for the File Number Sequence so that was all fixed.

Next to fix the White Balance. On the D70, I had White Balance set to Direct Sunlight + 3 when using the DIY softbox on the SB-800. The same option was not available for the D300, however, the D300 has 4 banks for storing preset manual white balance readings. I have a gray card so using preset manual (page 136ff) was going to be easy. I did this with the SB-800 and soft box mounted and then moved the recorded setting from d-0 to d-1 for storage. I now just have to remember to change it when using a different light source. I may also have to record some others (e.g. without the softbox and for the SB-24). 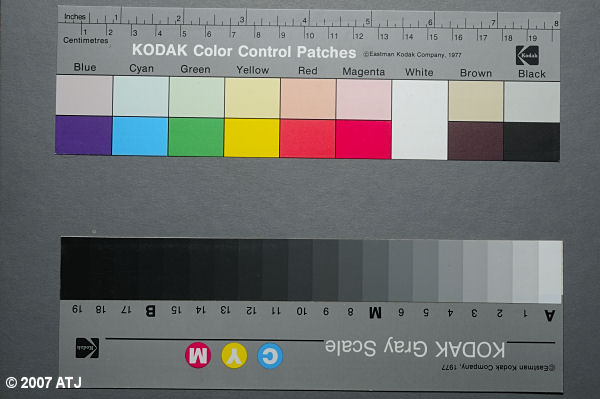 Later in the night I went out with a flashlight and the D300/SB-800/softbox combo to take some photographs. I ended up taking around 30 shots all hand held and I am pleased with every one of them. I have included a few of them below. 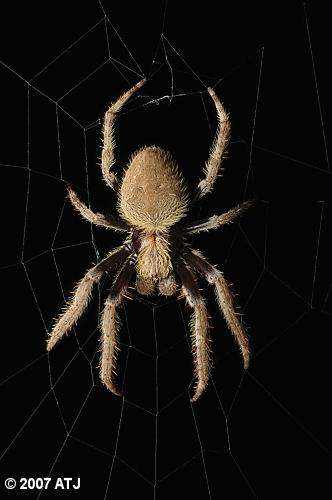 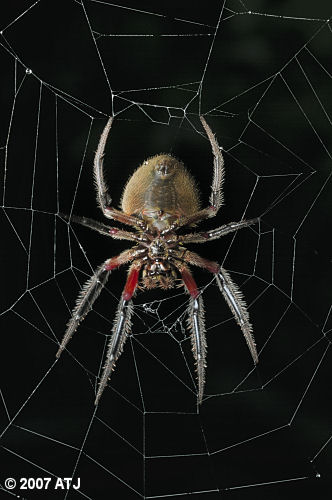 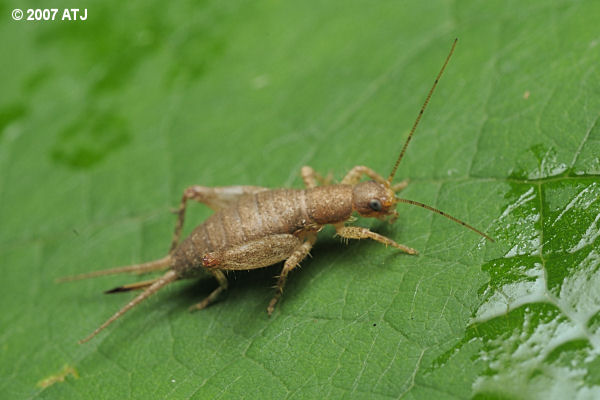 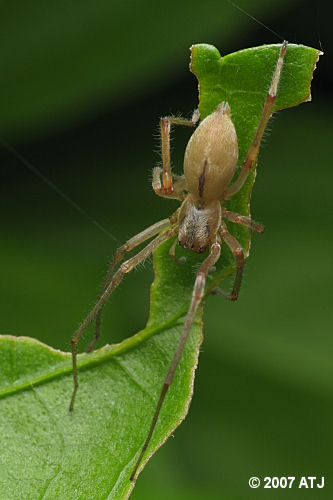 The camera is very easy to use and I have not had any real problems adjusting from the D70. A number of controls are in different places but are easy to find. I love the large LCD screen and larger, brighter viewfinder. One thing I think will take a bit of getting used to is the card slot cover latch. It doesn't seem intuitive to me and I have to study it each time I want to remove or insert a card. I guess I'll get used to that and also the fact that the card seems like it goes in the other way around compared to the D70.

I am very pleased with my purchase and it has certainly lived up to, if not exceeded my expectations. It is going to be a joy to use. I now have to wait for the Ikelite Housing to be readily available. In the mean time, I will continue to use my D70 for underwater work.